A New Theory of Alzheimer’s Disease 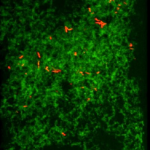 The hypothesis is at odds with the prevailing ideas. But the work of Harvard researchers published last Thursday in Science Translational Medicine has the potential to change the course of Alzheimer’s research. The paper proposes that amyloid protein, also known as Abeta, considered to be the hallmark of Alzheimer’s, are “natural antibiotics” that flood the brain if the brain is invaded by bacterium, fungus or other pathogens. The data presented support the theory and the concept has an elegance in its ability to explain what, until now, has not been understood.

Abeta is known to be “sticky”. This property makes it difficult for the body’s natural mechanisms, or drugs, to eliminate the protein from the brain. No one has figured out what causes the Abeta to develop in the brain, or how the accumulation of Abeta triggers the production of Tau proteins, which cause the brain neurons to collapse and die.

The Harvard scientists theorize that Abeta serves a protective function. Last year, the Harvard lab developed the ability to grow human brain cells in a petri dish. Building on this development, the scientists took these petri dishes and added different pathogens, such as bacteria, fungi and viruses. These cells subsequently developed Abeta plaques that encapsulated the invaders, blocking them from the brain neurons. The paper published last week discusses the findings using roundworms, fruit flies and mice, all of which responded to exposure by developing amyloid plaques.

We consider the brain to be protected from infections that may invade our bodies due to the blood brain barrier, which allows only very small molecules to pass into the brain from the blood stream. However, as scientists focus on the Alzheimer’s, they have learned that the blood brain barrier starts to break down in humans as they age. Therefore, it makes sense that Alzheimer’s, a disease associated primarily with old age, is the result of recurrent brain infections that have been killed off by Abeta. It is the detritus of this antimicrobial activity that results in Alzheimer’s. As described by Drs. Moir and Tanzi on Science Friday, these infections are likely to be recurrent, low grade infections that are often asymptomatic in people.

Dr. Tanzi describes the reported study as a “proof of concept”. This concept will now be evaluated and tested by many others. The next step for the Harvard scientists will be to evaluate the brain tissues of hundreds of Alzheimer’s patients to identify what pathogens trigger Abeta production. The Cure Alzheimer’s Fund, which also underwrote Dr. Tanzi’s work for the “brain in a dish”, is providing $500,000 for this work.

The theory behind all current drug research is that Abeta is a destructive protein serving no purpose that must be eliminated from the brain. The paper published this week will require a rethinking of that approach. It also opens up new possibilities. If specific agents trigger amyloid production, the best treatment may be to eliminate the agent from the blood before it crosses the blood brain barrier. Another approach may be to modulate the accumulation of Abeta so that it does not reach a level that results in the production of tau. If further testing supports the “infection hypothesis”, it could be the start of new and more effective treatment of this disease.