Alice came to live with her daughter, Dana Walrath, when she could no longer live alone due to Alzheimer’s disease. In the Walrath’s Vermont home, different threads of their lives and talents came together in new ways:

Over the years that Alice lived with Dana, the family experienced many common caregiver challenges: “time travel” as her mother relived experiences from her youth and from World War II, agitation at the end of the day, hallucinations of her deceased husband, and being unable to remember what was just said.

Walrath has shared her journeys with her mother in an illustrated series of stories entitled Aliceheimer’s: Alzheimer’s Through the Looking Glass. Each story has a title taken from events in Alice in Wonderland. Its many illustrations are whimsical and arresting, and include the use of passages torn from a cheap copy of Alice in Wonderland.  People with dementia can follow the stories in pictures, if not in words, although the words are poignant and revealing.

Walrath understood that her mother, while suffering from Alzheimer’s, still knew her past, had many thoughts and emotions, and responded to human connection. She knew that her experiences with her mother would be less stressful if she accepted her mother’s reality and didn’t try to ground her. She saw humor as a way to cope. She was rewarded with a new understanding of and a closer relationship with her mother. 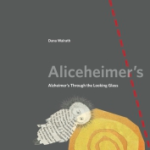 Aliceheimer’s reveals how to use empathy, humor and imagination to share experiences with a Alzheimer’s patient. While some may see Walrath’s work as too optimistic, caregivers seeking ways to connect with those living with dementia will learn from this unique and creative book.